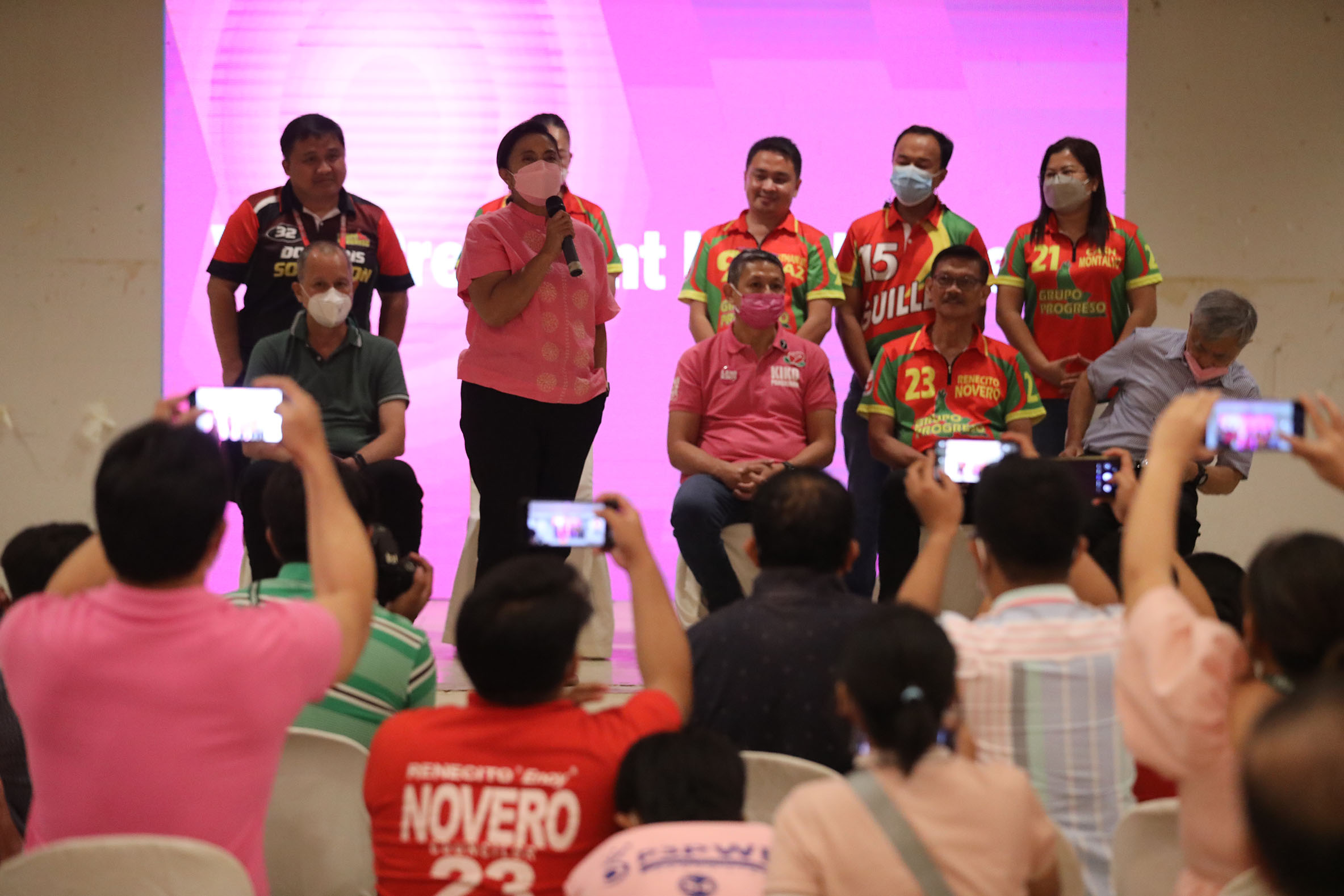 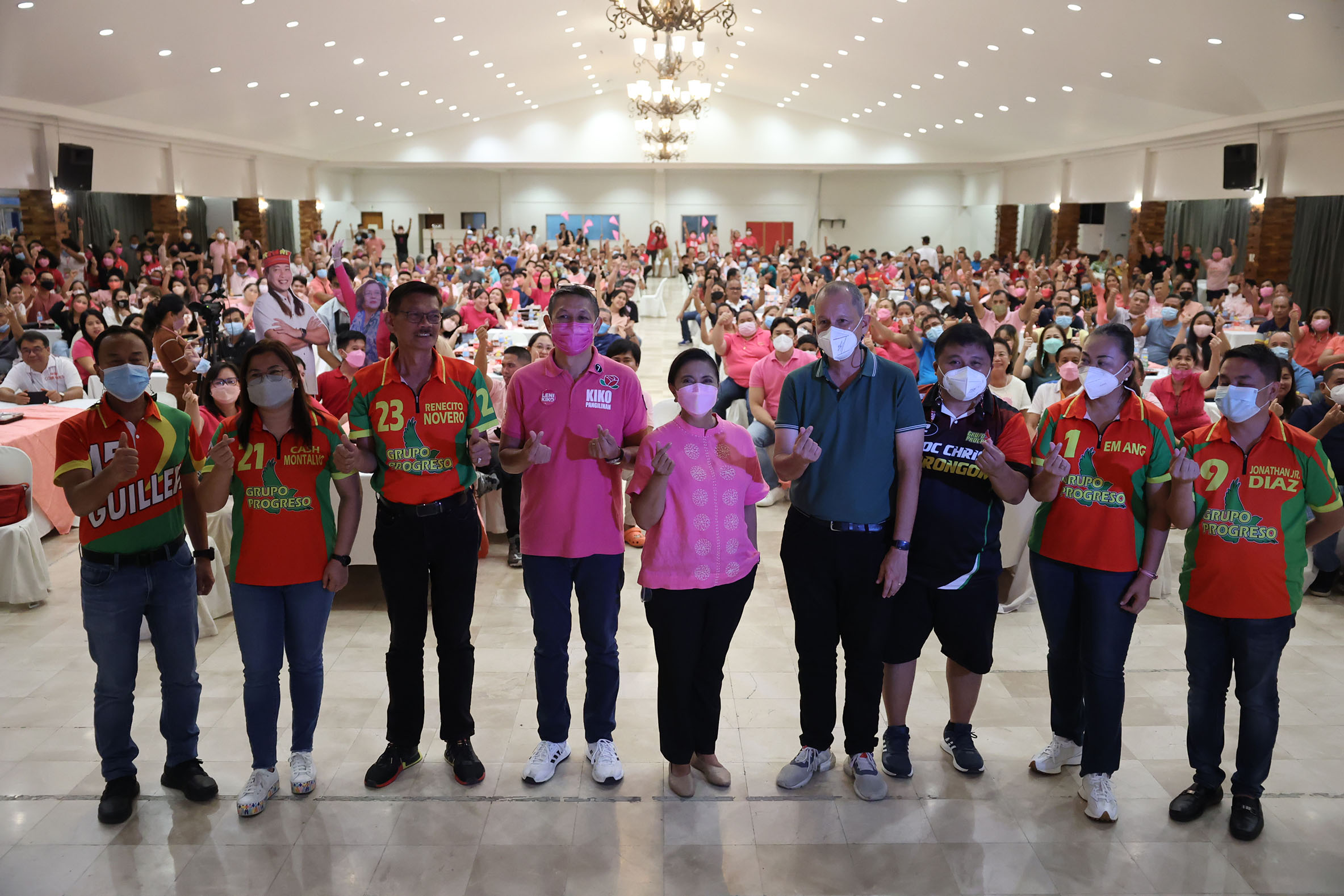 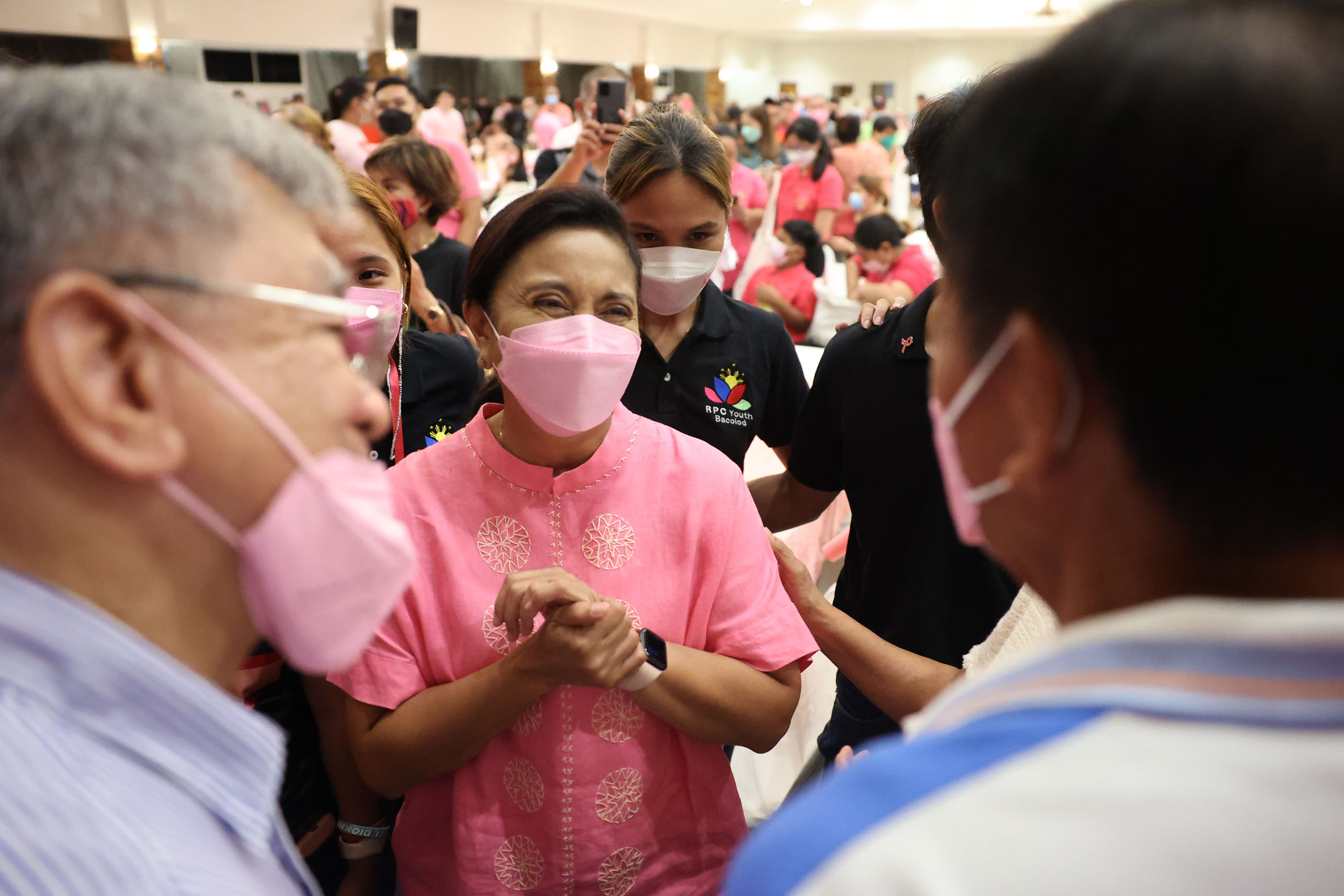 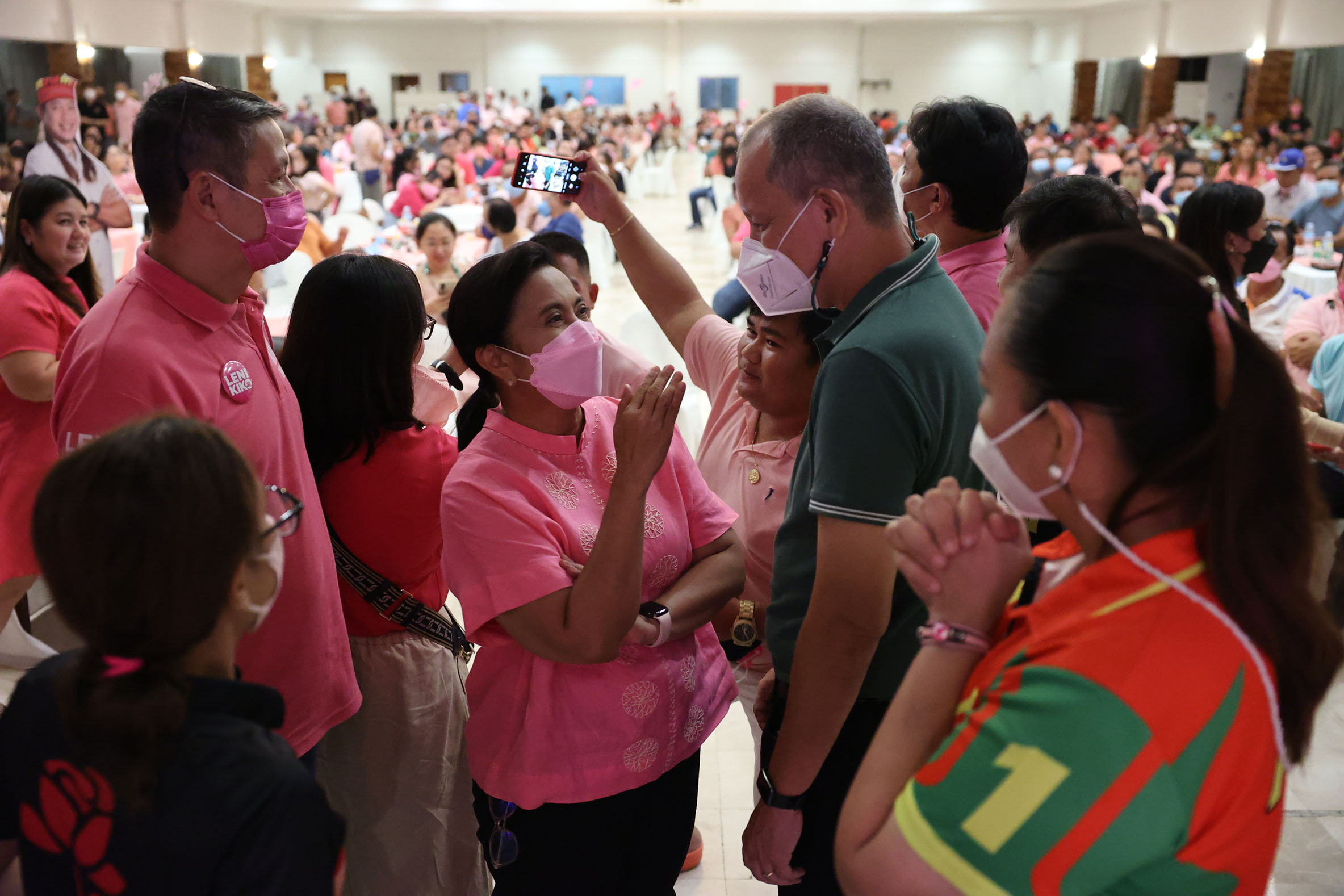 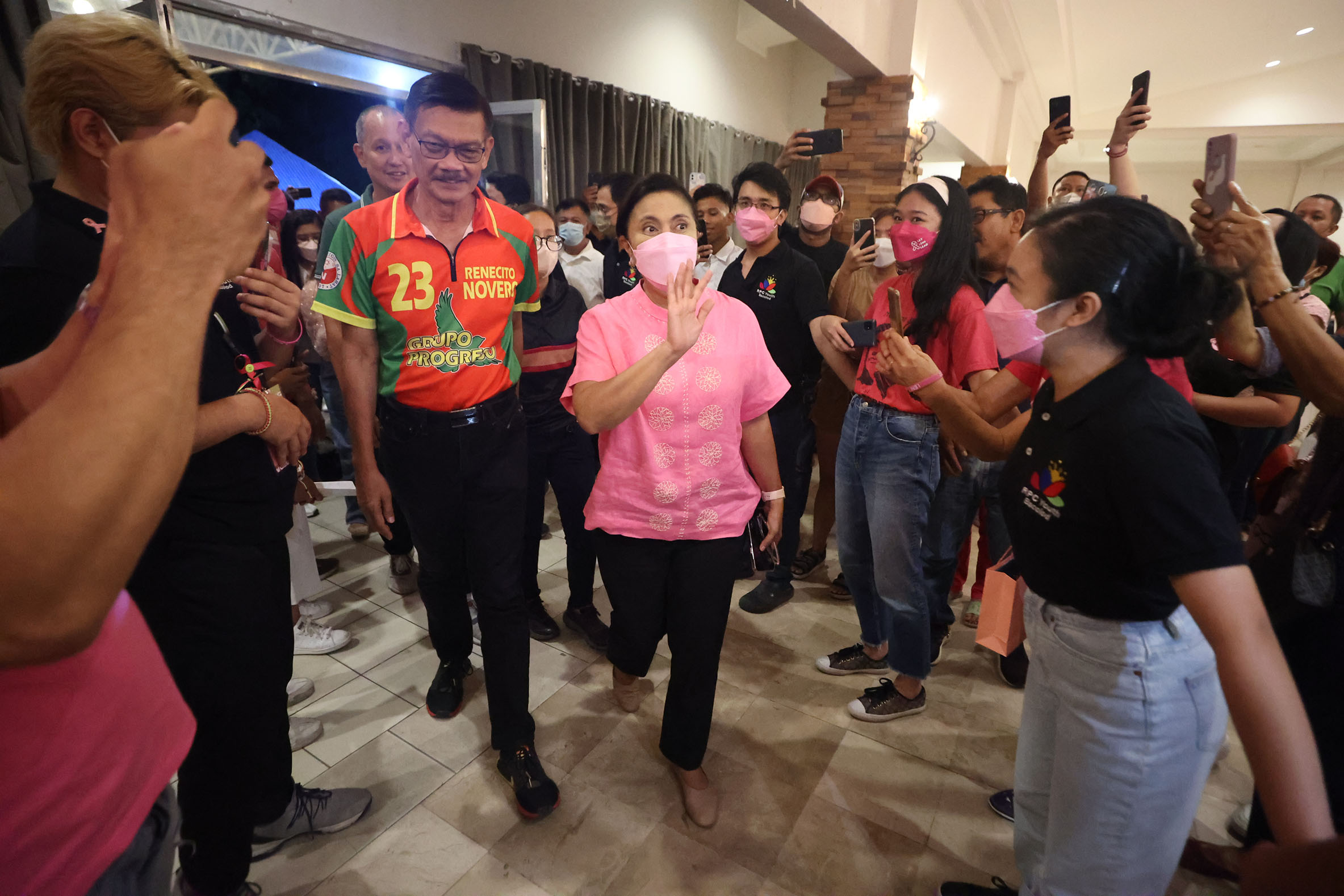 At lalo po hindi kami napipilitan pumunta rito. We have gone all together with [Cong. Dan or with our Congressman Dan 1:02- 1:04], Councilor [Chris Sorongon, Councilor Em Ang, Councilor Diaz, Councilor Guillem, Councilor Cash Montalvo, and this your honorable friend and servant, Councilor Novero to join by common dream and desired prayer for a genuine transformation to our country where leaders are loved and not feared. And so we have prayed; we have searched for someone. We have found a woman– not just a woman but a wife to a husband who served the people. But not just simply a wife - a lawyer who set the rule of law in our country. But not just simply a lawyer - he– she became a Congresswoman herself. But not simply a Congresswoman - she became a prized Vice President, second highest in executive office of our homeland. And she will not remain simply a Vice President. By the Grace of God, we have Leni Robredo, the next President of the Republic of the Philippines. [inaudible 02:26-02:27].

And this support goes along with Kiko Pangilinan for [inaudible 02:42] who is represented here by his younger brother. We pray for your success. We pray, please lead henceforth with the fear of God and respect the rule of law that we may see a transformed Philippines and his glory and greatness crossing and crisscrossing with local frontiers. God bless you, Madam President.

VP LENI: Thank you very much. We are very much humbled by your endorsement. We know that it is very difficult to be with somebody who is not a frontrunner. But that's exactly the very reason why all the support we've been getting from local officials and all the other sectors, we value them very much. We appreciate them very much because  it is not very easy to be aligned with us at this part of the campaign.

I– this is also what I told the other group earlier that after all is said and done, all of us here that exerted all our very best to help in whatever way we can in our campaign. We share your dream for a transformed Philippines and that dream will be achieved not just by the officials we elect but by the electorate that, you know, will fight alongside all of us.

And 'yung pagpili nito, ano ba 'yung gusto natin? Gusto ba natin the same kind of politics? The same kind of patronage politics that has been pervading in our society for so long. Or do we believe that power is really in the hands of the ordinary Filipino? Na kayang-kaya natin, you know, despite the difficulties to hurdle all the, you know– not just the difficulties pero 'yung mga– ano ito, mga volunteers natin maraming nire-report na mga harassments.

Ito, this is exactly the same thing that I said a while ago na after all is said and done, I know we can tell ourselves na we fought a good fight. We have finished the race. And then to know we continue to keep the faith. Alam po natin na whatever happens after May 9, kailangan tayong patuloy na lumaban for better Philippines for all of us.

So, maraming salamat for all the, you know, for the trust that you have accorded to Senator Kiko and myself and our slate. Thank you for the support. In 2016, you gave me a huge number of votes in Negros Occidental despite the fact that not many of you know me very well yet.

Now that I am asking for your help again, mas malakas na po 'yung loob ko ngayon na I can face all of you and tell you na hindi ko sinayang 'yung trust and confidence that you have given me in 2016. And I can only promise you na hindi magbabago 'yung paniniwala natin about governance. 'Yung paniniwala po natin, memorized na ito ng lahat na supporters natin: gobyernong tapat lang ang mag-aangat ng buhay ng lahat.

And when we say gobyernong tapat, we mean giving you the kind of public servants that are matino and mahusay dahil 'yun lang naman talaga 'yung susi para we start the transformation rolling pero hindi namin kaya ito. Hindi namin kaya if you will not fight this fight alongside all of us. So, maraming salamat again. Mabuhay po kayong lahat.