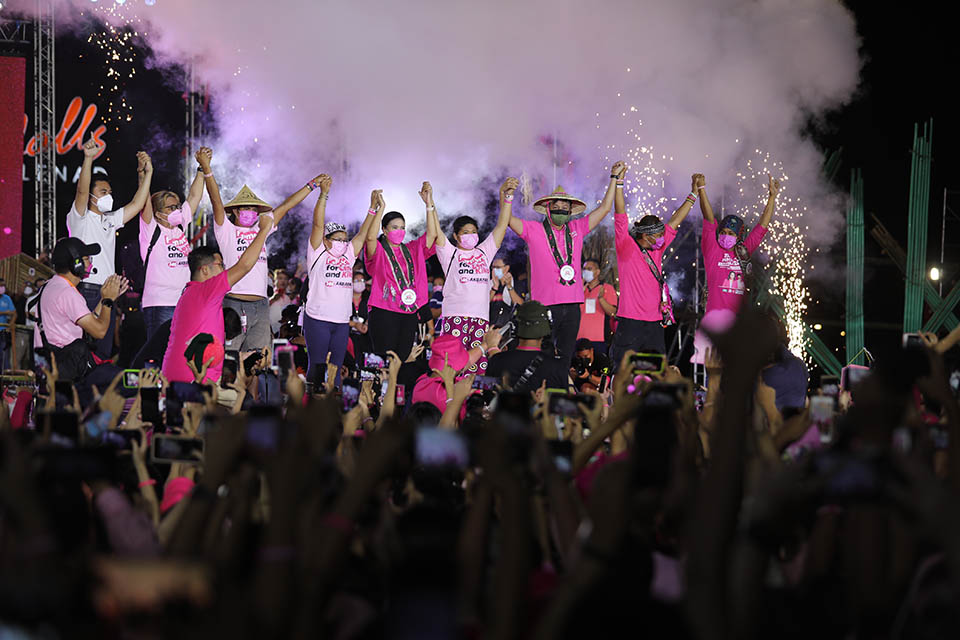 After a difficult but fulfilling 4,400-kilometer walk, the Sumilao farmers of Bukidnon were finally able to raise the hands of presidential aspirant Vice President Leni Robredo and her running mate, Senator Francis "Kiko" Pangilinan.

The Sumilao farmers walked for 40 days to show support for Robredo and Pangilinan. They made surprise appearance at the "Tanglaw: Laguna People's Rally", held in Sta. Rosa, Laguna, on Friday night, April 29.

The walk is their way of standing with the four million farmers and their families who still experience hunger and poverty, of showing solidarity with the thousands of volunteers who are campaigning for Robredo and Pangilinan, day in and day out; and lastly, of reminding Filipinos to fight for what is theirs.

The summer heat was intense while they waited for the rally to start, then it rained hard, turning the mammoth crowd into a sea of colorful umbrellas.

When it was Robredo’s turn to go onstage, the rains stopped, as it did in several rallies in the past when there was sudden inclement weather.

In her message, Robredo took the opportunity to look back at the time when she declared her candidacy for the May 9 elections.

Robredo said courage was all she had as she was in the bottom of the surveys at that time.

In the remaining nine days of the campaign, Robredo encouraged her supporters to exert all remaining efforts to advocate for the honest kind of leadership and good governance she, Pangilinan, and their senatorial ticket uphold.

She said in convincing people, one should be calm when having conversations.

In closing, Robredo reiterated her promise to serve all Filipinos, regardless of their political colors. She said she will encourage true unity among all Filipinos – one born out of love for the country. [End]